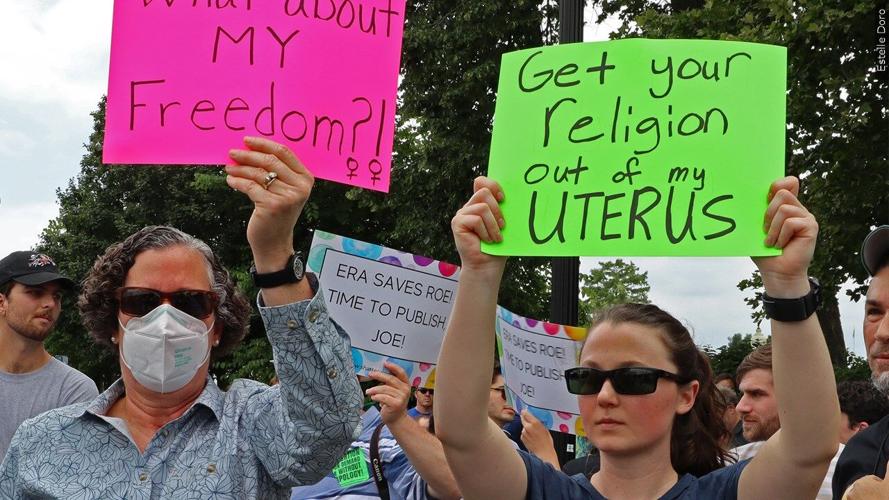 Protesters in front of the US Supreme Court after Roe v. Wade overturn. 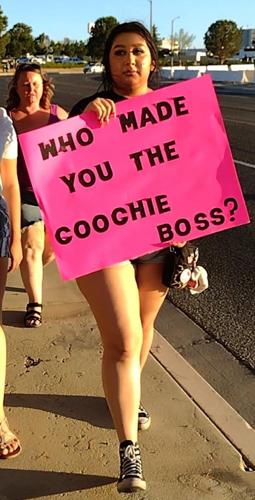 A photo of a protester in front of Victorville City Hall on Friday, June 42, 2022. About 100 people showed up to protest against the SCOTUS decision on abortion.

California Republican Representative Jay Obernolte has put his support behind the U.S. Supreme Court decision to allow states to decide whether or not they want to ban abortions.

The June 24, 2022 decision by the Supreme Court to overturn abortion rights for women has been sending ripple effects throughout the United States.

Protest and rallies throughout the country, state, and local cities have been sending divided messages as the nation continues to explore an argument that was settled nearly 50 years ago.

In Victorville at the superior courthouse, about 80 people showed up to show their disagreement with the Supreme Court ruling. Organizers from Bansoffabortions.org, who were in charge of the rally at the Victorville courthouse say that California has taken several steps and has gone to extensive measures to protect a woman's right to privacy. In 2019, Governor Gavin Newsom issued a proclamation declaring California a Reproductive Freedom state. Two years later, a couple of bills were signed into law. Assembly Bill 1356 increased security, and Assembly Bill 1184 increased privacy protections. One step further, just this past year, Governor Gavin Newsom signed Senate Bill 245 into law, which eliminates co-pays and co-insurance – making abortion services free for people with private insurance.

Rep. Obernolte's (R) stance on abortion came out just hours after the ruling. According to his official statement, the congressman agrees with the court's statement that abortion should be left up to "people's elected representative."

My statement on today's Supreme Court decision below: pic.twitter.com/aUTtwg7PxR

Dr. Janet Jacobson is an Obstetrics & Gynecology Specialist who practices for Planned Parenthood of Orange and San Bernardino Counties. Dr. Jacobson tells HD Daily News that people should "Pay attention to the issues and vote. Vote out elected officials at all levels who do not support safe, legal abortion, access to contraception, and sexual health education."

The one topic about abortion that continues to stay hush for Republicans is women impregnated as a result of rape or incest. Yes, it's more common than one would think. According to the U.S. Department of Justice, around 10 percent of American families have an incident where incest occurs, but only 20 percent of those offenses are ever reported. The crime often goes unreported because it is initiated by someone the child, usually a girl, loves and trusts.

And then there's rape. The CDC recognizes Rape-Related Pregnancies (RRP) as a public health problem where sexual violence and reproductive health connect. Nearly 3 million women in the U.S. experience RRP during their lifetime.

Rep. Obernolte (R) additionally has voted no on the "Violence Against Women Reauthorization Act of 2021," a bill that authorizes new programs, makes changes to federal firearms laws and establishes new protections to promote housing stability and economic security for victims of domestic violence, sexual assault, dating violence, and stalking. The bill passed the house and 29 Republicans supported the bill, including representatives from Oklahoma, Texas, Iowa, Idaho, and Wisconsin.

President and CEO of Planned Parenthood of Orange and San Bernardino Counties, Jon Dunn says that "people will die and have their lives upended by today’s decision to overturn Roe v. Wade. It will negatively impact more than 36 million Americans. While we are fortunate that lawmakers in California are committed to protecting and expanding abortion rights, at least 26 states, including Arizona, Texas, Mississippi, Oklahoma, and many others have already enacted cruel, draconian laws that severely restrict or ban access to abortion."

50 cozy towns to visit this winter