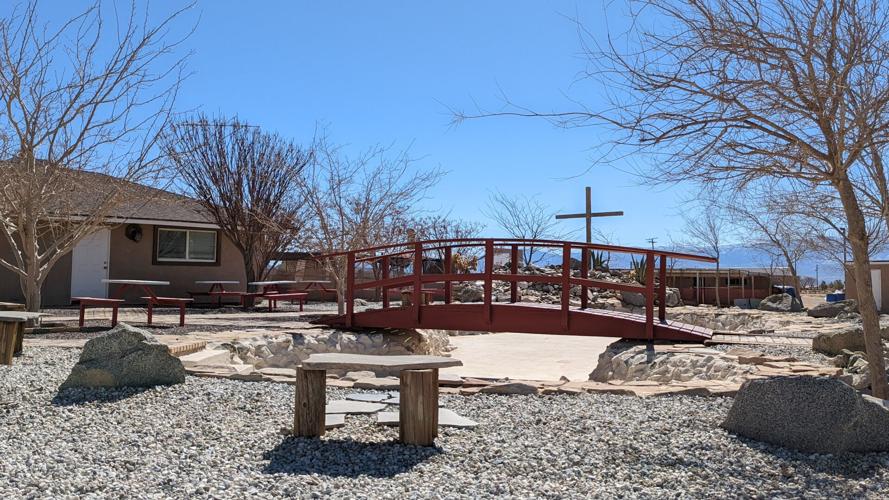 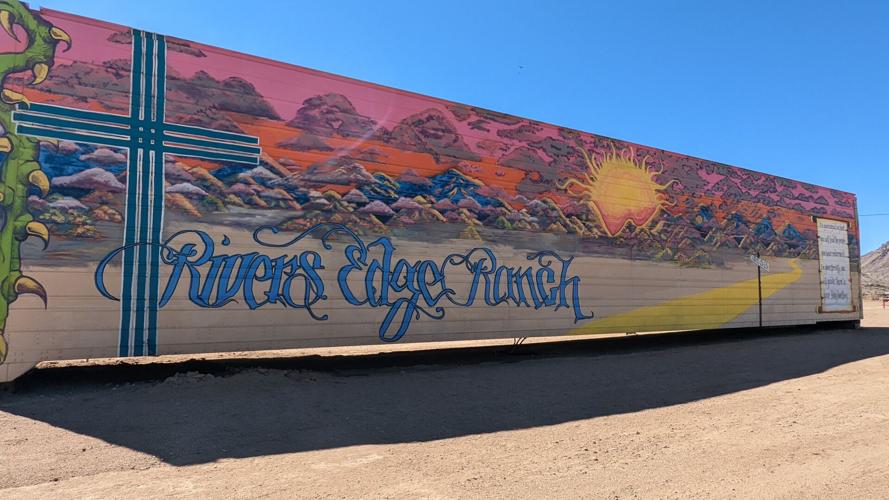 The mural that sits at the front of the property was created by hand from an artist who was in recovery at the ranch recently.

Families have been torn apart and completely changed forever because of addiction. The Disease doesn't discriminate against Black, White, Mexican, Asian, rich, poor, middle-class, gender or any other socio-economic marker.

HD Daily News had a special opportunity to tour a men's recovery ranch in the middle of Lucerne Valley that has been changing lives for the better with those that have experienced the Disease in their lives.

We drove up to the River’s Edge Ranch (RER) one afternoon and observed a place where hope can be restored for men with broken lives, empowering them to live the “abundant life” and have a positive impact on their families and communities.

RER serves adult men who seek to recover from the travails of substance abuse. All walks of life for men are welcomed here, including veterans, parolees and homeless men who have been referred by family, friends, local churches and community organizations. A one-year commitment to RER’s multi-phase approach is required from participants. This approach integrates manual labor, animal-assisted therapy, service to others, faith and mentoring support.

Did you know that in 2020 alone, nearly 92,000 people died in the U.S from drug-involved overdoses and when it comes to alcohol use disorder, 14.8 million Americans suffer from it each year? To aid in combating these issues, San Manuel Band of Mission Indians provided a grant for $1,345,000 that quadrupled the $250,000 raised separately by the RER in 2021 during its G1VE FOR ONE capital campaign for expansion. As a unique “transformation center," River’s Edge Ranch is unlike traditional rehabilitation programs, offering extended residential treatment for up to a year in comparison of 30, 60, 90-day programs.

San Manuel says that this gift will help the ranch with future growth and provide additional opportunities for those men in recovery to positively impact their families, places of work and communities.

The River’s Edge Ranch is located in the San Manuel's ancestral High Desert lands and since 2007 has served hundreds of men seeking to recover from substance abuse. The ranch's purpose has expanded to parts of the Inland Empire once men graduate the program in Lucerne Valley. Services are not only provided in the desert, but also throughout the Inland Empire with facilities located in Fontana and  San Bernardino County's unincorporated areas of Lucerne Valley.

During the one-year program, men begin their recovery at the ranch where they live and work full time while restoring their mental, physical, and spiritual health. At the end of a year living on the ranch, the men then have the option of moving into supervised transitional housing and begin working in full-time jobs while continuing to rebuild their lives.

A real big supporter of the River's Edge Ranch comes all the way from the top. San Manuel Band of Mission Indians' Chairman Ken Ramirez opened up to HD Daily News on his views and thoughts regarding the ranch. Chairman Ramirez explained why the project is so important to San Manuel, saying "The worth of every person is important, particularly when someone is afflicted by issues that are beyond their ability to control or overcome. River’s Edge has proven that their approach to helping individuals to overcome challenges and help them to re-enter society as productive, contributing citizens is one that helps all communities.  We are pleased to partner with an organization that has demonstrated such success over a sustained period."

Chairman Ramirez was asked about some of the biggest challenges a person may face when seeking help, he answered by saying, "People who can benefit from programs and services such as those offered by River’s Edge first must admit that they need help.  Once that threshold is acknowledged, then the services needed for a person to overcome challenges and deal effectively with their situation can be determined. We applaud River’s Edge for their success with helping individuals."

HD Daily News spoke to Doug Whiteman, board president for The River’s Edge Ranch about the ranch's early beginnings and what makes the ranch unique from other rehab programs. Doug says the new ground breaking that took place recently is to expand the operations at River's Edge. The ranch expects to soon have a more efficient kitchen, a dining hall and some offices as well as leaders that stay past the one year program. The new developments have been expected to double the capacity of male occupants the ranch can take at one time.

On average, usually 1 in 10 addicts stay clean and/or sober. The statistic, however, is a loose measurement and is based on several mental health professionals that have worked in a rehabilitation setting for an extended period of time. As mentioned earlier, it's common for people that go to rehab where they attend a 30, 60 or even a 90-day program. The River’s Edge Ranch has a one year program. Doug says that specific change is what could amount to the success of the ranch. He says a year on the ranch helps men break old patterns and habits. Additionally there is a "Phase 3" that the men go to once graduating the ranch's program. The 1 in 10 stay clean statistic greatly increases at The River’s Edge Ranch, with the organization saying that 8 in 10 stay clean and sober. The number at RER is measured by those men who have attended the program that stay off drugs and/or alcohol.

Doug says the ranch works best for those men that have struggled and tried a different way for 10, 20, 30 years and are finally ready to try something different. The majority of the men are 28-38 years old on the ranch.

Doug's own experience with drug and alcohol abuse started when he was in the 8th grade. While Doug was in his early 20s, still using, his older brother died from a heroin overdose. That when's Doug turned to God and said "I'm done." He says he quit "cold turkey."

According to the National of Alcohol Abuse and Alcoholism around 68,000 men die from alcohol-related causes annually, making alcohol the third-leading preventable cause of death in the United States. The CDC says that nearly 841,000 people have died since 1999 from a drug overdose. In 2019, 70,630 drug overdose deaths occurred in the United States. The age-adjusted rate of overdose deaths increased by over 4% from 2018 to 2019.

Who makes the best Pumpkin Spice Latte in the High Desert?

On The Record | Stevevonna Evans

On The Record | Derek Marshall

On The Record | Joe Russell

On The Record | Gary Arce

Green Lifestyle Changes That Benefit Both You And The Planet

On The Record | Miguel Soto

On The Record | Joseph W. Brady

How To Survive and Thrive During a Midlife Crisis

FIRING BACK: A Victor Valley Conversation on Mass Shootings